Male Lineage, or Y-STR, Testing is a DNA test that specifically examines the Y chromosome present only in males. This test is useful in determining relatedness through male lineage, although it may be more useful in disproving relationship.

Here’s How Lineage is Determined
To determine if male participants share the same paternal lineage, the participants must share or suspect that they share a relative from whom they have descended along the same line of males. 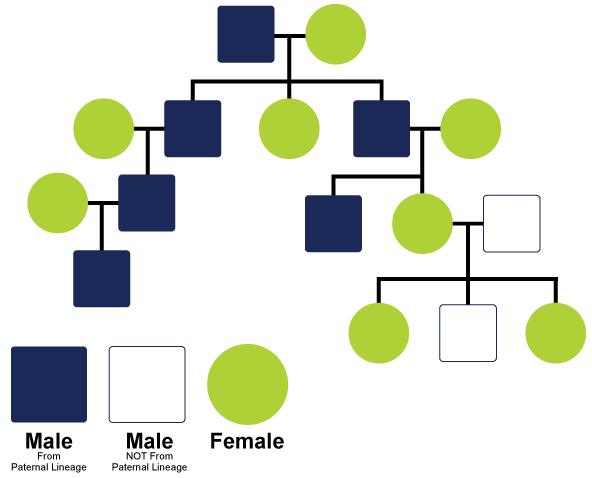 While Y-STR Testing is a useful tool to examine male lineage, it does not determine the specific relationship between two males sharing the same male lineage.

Y-STR Testing can exclude males from a male lineage, and this can often be important information.

Visit Interpreting Your Results to learn how to better understand the findings from your Y-STR Test.

GenQuest also offers Mitochondrial DNA Testing.
mtDNA Tests are used to determine relatedness through female lineage to help identify maternally-linked relationships. Unlike with Y-STR male lineage tests, participants in mtDNA Tests can be male or female participants who suspect that they share a relative through a maternal line.

Mitochondrial DNA is passed onto children of both sexes through the mother.
In a mtDNA comparison, analysts examine the sequence of each participant side by side.
If certain regions along the mtDNA sequence is shared, this indicates that the participants share a common female ancestor through their maternal heritage, such as a mother or maternal grandmother.

As with Y-STR Testing, mtDNA Tests do not determine the specific relationship between participants, but rather are useful in proving a shared female ancester along the maternal line.